British bangers are regarded as iconic, and they are widely cherished in the United Kingdom. Bangers became extremely popular in the World War 1 era, where these sausages would be sold with cheap fillers, which made them explode in the pan when cooked too quickly. Hence, people would be careful and try to cook them slowly. This is why they are wittingly called ‘bangers’.

British bangers are known for their incredible flavor. They are usually made of beef or pork or a combination of both. They typically contain sweet and savory spices. They are usually preferred with mashed potatoes and onion gravy. At present, the people in the UK typically refer to the sausages as ‘bangers’ only when they see mash served with it. 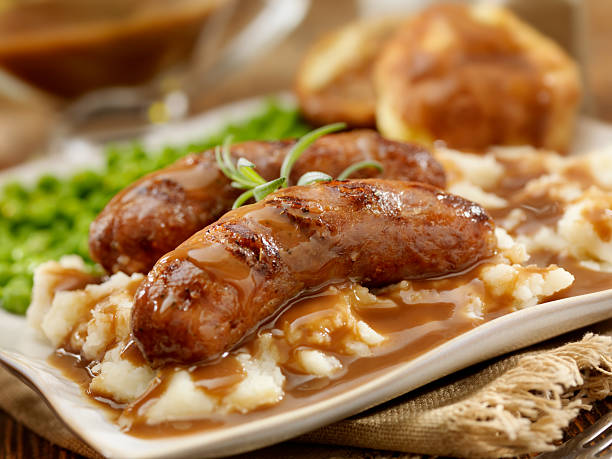 People in the UK usually prefer baked beans on toast, tea, and toast, marmite on toast, bacon and eggs, porridge, and cereal, among others, in the morning. British bangers also happen to be one of the most preferred breakfast items! In fact, there is even a society in England known as the British Sausage Appreciation Society!

The ideal British bangers should typically contain a high percentage of meat with natural casings. Many people prefer their British bangers to have some chili and smoked garlic flavors. The mash should ideally be smooth and consistent, with zero presence of lumps, while the gravy should be thick and be made with chicken stock and red wine. Most people don’t like to have veggies with their British bangers.

There is a wide variety of interesting British bangers to try, and they are usually named after the regions where they come from. Some of the most popular British bangers from England you should try are Cumberland Sausage, Lincolnshire Sausage, Yorkshire sausage, Suffolk sausage, Gloucester sausage, Manchester sausage, Lorne sausage, and Marylebone Sausage.

The best place to buy British bangers is from butcher shops in the local areas. You will want to look for shops that pride themselves on making their British bangers. They will be healthy for consumption, with no presence of any chemicals.

Another benefit of buying your British bangers locally is that the shop owners will be happy to meet your requests and prepare the British bangers with the right combination of spices and ingredients.

Make sure to purchase some British sausages and get started in your kitchen! You will find many British banger recipes available on the Internet that will involve different ingredients and methods of cooking.


View all posts by Michael